Over 250,000 Satisfied Clients
Read what customers have to say

“I called them up at 10pm because we had a sudden burst pipe in our home. They were there within the hour, the owner assured us that it was going to be great and explained to us exactly what they were doing. They really went above and beyond our expectations. All of our stuff was put back together perfectly, and we were VERY happy with how it all turned out. Definitely our new favorite company.” -Mark G. San Diego, CA

Wondering what can be done in 18,250 days or 438,000 hours? Well, here at Ace Contractors we have used that period of 50 years to deliver services to San Marcos that can’t be beat at prices our competitors shy away from. We aren’t the leader in the plumbing and HVAC sectors for no reason. We’ve earned that title because our contractors show up on time with a friendly attitude and get the job done again and again. 250,000 is the number of satisfied customers that appreciates the quality of effort we bring to our industry every day.

Ace Contractors can help you with any heating, cooling, and plumbing problem, no matter if it’s big or small. We can handle projects such as general repairs, backflow prevention, installing anything from garbage disposals to showers, and replacing humidifiers and ensuring that you are breathing in the best quality air possible. As your neighborhood locally owned and operated company, we understand that being accessible to our clients is top priority. That’s why we make it our business to have someone waiting by the phone 24/7/365 to attend to any plumbing or HVAC need you should have. In an urgent case, we can have someone at your property in no time to handle whatever problem you have encountered.

The above is what has ingrained our company into the greater Southern California area over the past several decades. We are honest and reliable and don’t cheat our customers like some other firms. You pay for the services you need and nothing more. In fact, you will probably be amazed at how much you can save working with a quality company such as us. Our staff is friendly and knowledgeable and won’t show up and do a sub-par job. We take pride in offering the best San Marcos has to offer in plumbing, heating, and air conditioning. Superior service is only a phone call away!
Coronado Plumber
San Diego Plumbing Co. 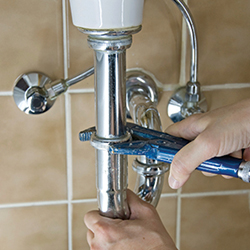 San Marcos is a city in the northern part of San Diego County surrounded by Escondido, Carlsbad, Encinitas, and Vista. It has a total land area or 24.4 Square Miles. It has a relatively mild weather in May and June, just like the coastal area of San Diego. It can be very warm though during the summer months in view of the Santa Ana Winds, which incidentally can cause wild fires in the area. Usually it rains between November and March, and during the winter months, the temperature hardly goes below freezing point.

It is culturally and ethnically diverse, with Asians, South Americans, even Europeans living with the locals in the area.

It has a host of tourist attractions, in fact the city has been known for having a great selection of restaurants in the Northern Part of San Diego County. These restaurants are mainly concentrated in what is called “The Restaurant Row.” The restaurants in this area have a variety of cuisines.

San Marcos also has some Golf Courses, and is also home to prominent hotels and Inns like the Ramada Inn, the Hamptoon Inn, The Lake House Resort among others. San Marcos is also home to the Double Peak Park which gives its patrons a good glimpse of the Skyline of Downtown San Diego as marked by its Sky Scrapers. The San Bernardino Mountain can also be seen from this vantage point on a clear day.

One can also see some historical houses within the city that are being carefully maintained by the San Marcos Historical Society.